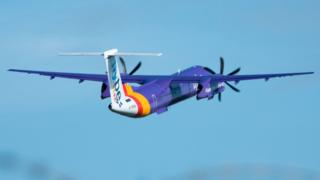 Although it has been around under various names for the past 40 years, Flybe has never been an airline for the masses.

The number of passengers it carries pales by comparison with better-known budget carriers such as easyJet or Ryanair.

As a company, it is only a tenth as big as collapsed holiday firm Thomas Cook, so there is little prospect of a government bailout.

But those who habitually choose Flybe see it as a vital service, because it reaches the places that other airlines fail to touch.

“As someone who travels with them frequently for work, Flybe’s collapse would be a disaster for the NI economy.

“If this happens, Belfast City Airport will have only four flight routes. FOUR.”

Despite Jason’s heartfelt words, there are a number of other locations that owe just as much to Flybe in terms of connections to the wider world.

Cornish holiday resort Newquay, for one, has no direct rail services from London and the journey takes about five hours. But Flybe can get you from London Heathrow to Newquay airport in little more than an hour.

And if you live in the Isle of Man, Flybe’s service can literally be a lifeline.

The airline has a contract with the government to transfer NHS patients from the island to medical facilities in Liverpool when they require treatment that cannot be provided closer to home.

The Isle of Man government said it was aware of Flybe’s reported financial difficulties and that it had been advised by the company that it was operating as normal.

“We continue to make bookings on behalf of patients to ensure they are able to attend medical appointments in the UK,” it said.

Small wonder, then, that Ben Bradshaw, the MP whose Exeter constituency includes Flybe’s base, has spoken of the “valuable connectivity” that the carrier provides.

In fact, he described the airline as “a strategically important business”.

Thanks to Flybe, Mr Bradshaw’s constituents can fly from Exeter direct to a variety of destinations including Amsterdam, Paris and Geneva – places that would otherwise be accessible to them only after a lengthy trek via London.

And Flybe’s community links with the area go further, since it has sponsored Exeter City football club since 2003 and has its logo prominently displayed on players’ shirts.

Other regional airports where Flybe has a significant presence are Birmingham, Southampton, Manchester, and Cardiff. Some of them would have difficulty continuing as going concerns if Flybe went bust.

As well as business people and tourists, Flybe also helps many far-flung friends and relations to maintain links.

Alex Simpson, who is British but lives and works in the Netherlands, said on Twitter: “I fly with Flybe regularly from Amsterdam to visit my family in Devon.

“Compared to other airlines, it is punctual with charming staff. I do hope that a solution is found that allows it to continue to operate long-term and sustainably.”

#Flybe is important to the connectivity of the regions of the UK. For Devon and Cornwall, it is a vital connector for business and leisure travel to Europe & the RoUK, that in a region without a centimetre of motorway, is critical.

Freelance art director Sarah Ward, who divides her time between London and Cornwall, is another Flybe frequent flyer. She tweeted that she would have to move house if the airline ceased to exist.

In an appeal to her local MP, Derek Thomas, she asked: “What are you doing to protect such vital infrastructure?”

In a country where costly infrastructure projects such as HS2 and Crossrail take an eternity to build, Flybe has provided a nimble solution to tough transport problems.

Its demise would leave a vacuum that would be hard to fill – and pose a dilemma for many people whose lifestyle depends on the routes that it serves.