Why is kosher food soaring in popularity? 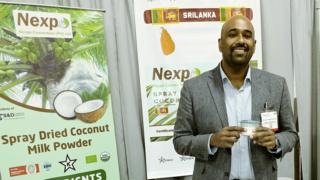 Exhibitors came from around the world, including Dakshin Thilina from Sri Lanka

It could have been any gourmet food fair, with lots of delicious things to eat.

The main hall at the Meadowlands Exposition Center, in New Jersey, was bustling with more than 6,000 attendees taking a look at 360 food and drink exhibitors from around the world.

The hundreds of products on show included everything from pizza bases made from cauliflower, to salsas, ice cream sandwiches, cider, beef empanadas (a Mexican pastry), Italian sorbets, gins, charcuterie, tequila, and even a range of biscuits infused with cannabis oil.

But this was no ordinary food and drink exhibition. For while there was a vast range on display, everything had one major thing in common – they were all certified kosher. Everything present conformed to kashrut, the Jewish dietary laws.

Numerous drinks companies were in attendance

The event at the end of last year was the 31st annual “Kosherfest”, a two-day gathering that touts itself as “the world’s largest and most attended kosher-certified products trade show”.

While Jewish-owned companies were proudly in attendance, many of the firms who were present are not owned or run by Jews, but had still chosen to go kosher. These included businesses from Pakistan, South Korea, Sri Lanka and Italy.

With the number of people attending up 800 from the year before, and 300 new products on display, Menachem Lubinsky, chief executive of event organiser Lubicom, said that demand for kosher food was growing strongly among non-Jewish shoppers.

“Kosher food appeals to a more health-conscious consumer,” he says. “It’s like a new generation of kosher. It’s different from those who have been there for many years, the basic kosher staples.”

Kosherfest has now been held for 31 years

The centre of the world’s kosher food sector is the US. For while only 2% of Americans are Jewish, some 7.5 million people, a study by the Quartz business news website found that 41% of all packaged food in the US is certified kosher.

Explanations for this include a perception that kosher food is cleaner or healthier, or people’s desire for assurance than a product does not include potential allergens such as shellfish. It also offers certainty for vegans, such as in the example of Oreo cookies, which prior to their switch to kosher in the late 1990s contained lard (pork fat).

Led by growing demand in the US, the global kosher food market is predicted to increase to almost $60bn (£40bn) of annual sales in 2025, up from $24bn in 2017. Given those vast figures, it is not surprising that a growing number of food businesses around the globe are seeking kosher accreditation.

“I think firms are coming from the basis that you can’t produce an ingredient anywhere in the world, and hope to sell it in the US, without being kosher,” says Mr Lubinsky. “There’s a significant market, and firms want a piece of it.”

But what exactly is kosher food? While most people understand that pork and shellfish are non-kosher, kosher animals such as cows and lambs need to be ritually slaughtered with a sharp knife. Meanwhile, food products cannot contain both meat and dairy. And not all parts of the cow can be consumed.

All kosher rulings have to be carried out by trained rabbis from a kosher certification agency. Richard Rabkin, managing director of COR, the largest such organisation in Canada, explains that the process is taken very seriously.

“Some people have this mistaken impression that we go there and bless the food, and that’s all it takes,” he says. “No, it is more complicated than that.

“We have an initial conversation with a company and get an impression of what they’re doing in the food, and take a look at all the ingredients, and find out whether it’s kosher or not. Once we have a picture of that, then we inspect the facility itself… We are guarding against cross contamination.

“Once we ensure all of that, there’s an inspection to make sure everything is followed according to kosher standards, and then certification’s granted. [But], inspection isn’t just time to time, it’s an ongoing basis.”

Back at Kosherfest in New Jersey, Dakshin Thilina was representing Sri Lankan food group Nexpo Conversion, and its kosher dried coconut milk powder and coconut oil. He explains that unlike some of his company’s rivals it doesn’t use any sodium caseinate, a milk-derived food stabiliser.

“Without that component our products are lactose-free,” he says. “And because they are non-dairy, kosher Jews can use them any time, alongside meat.”

Another Asian firm in attendance was Dewan Sugar Mills from Pakistan, which makes ethanol for mouthwashes. “We wanted to tell people that there’s nothing not kosher that ever comes into contact with what we make,” says general manager Adnan Pirzada.

And there from Dubai was South African expat Elli Kriel who runs a kosher catering company – Elli’s Kosher Kitchen. “I was producing kosher food for our family, and people started reaching out to me,” she says. “Travellers in particular, moving through the city, needed kosher food.

“I used to invite them to eat in our house, but I realised, when more and more people began reaching out, that I was in a good position to offer kosher catering.”

Mr Lubinsky says he is pleased to see kosher food branch out from the Jewish classics and “go upscale”. “It’s not your chopped liver and stuffed cabbage any more,” he adds.