Why is my train often late? 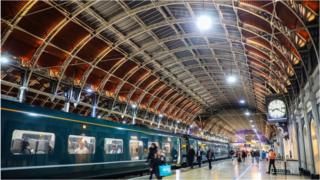 Broadly speaking, the people in charge of running our railways have two big challenges.

They can be summarised in two simple words: punctuality and overcrowding.

But attempts to fix the ‘o’-word can sometimes make the ‘p’-word worse.

It’s at the heart of much of the recent disruption on Britain’s railways. Apart from building new rail lines, overcrowded carriages can be tackled in two ways.

Firstly, you can run more trains on existing lines.

However the busiest rail lines in Britain are effectively full.

In terms of passenger numbers the UK’s railways are a roaring success.

But recent trouble on Transpennine Express, West Midlands railway and London North Western Railway have once again highlighted how the current rail system is struggling to cope.

In some senses, Britain’s railways are a victim of their own success.

Rail bosses often describe the lines they manage as ‘tubes’.

High-tech signalling and faster trains can allow you to squeeze more trains down those tubes.

But in reality there is a finite number of services that can pass through stations during rush hour on existing infrastructure.

Many of Britain’s commuter networks have reached that point.

If you operate the maximum number of trains at peak times then the margin for error diminishes.

And when a line is working at capacity the knock-on effect when there is an incident, like a faulty signal, is greater.

Think of the tube analogy again. When one tube becomes blocked then the back-log quickly builds up.

When train companies try and squeeze more trains onto the tracks when they re-jig their timetables every May and December, that’s often when problems occur.

West Midlands Trains, which operates services on two networks – London North Western Railway and West Midlands Railway has been criticised recently because it introduced a much more complicated timetable with lots more services in May last year.

Train companies are often obliged to add services to their timetables under contracts they sign with government, known as franchises.

A greater number of train services can reduce overcrowding but it can also jeopardise reliability.

The second solution to overcrowding is to change the trains.

You can add carriages to the trains you already have, however that can require longer platforms at stations so often, by virtue, that isn’t an easy option.

The other thing you can do is to introduce new trains.

New trains can be faster and greener but their carriages can be bigger, and better designed to carry a high volume of passengers.

Introducing new trains, if done properly, should only be a positive for passengers and the companies involved.

The recent misery for passengers on Transpennine Express are an example of that.

The company was forced to remove some of the services it added to its timetable in December in order to improve reliability for passengers.

Performance on Britain’s network is governed by a myriad of factors and players, both public and private.

But there is a balancing act to be made between pushing for a less overcrowded network and the inherent risk that can sometimes have on punctuality.

And achieving the right balance is made harder or easier by the structures which govern the railways.

Those structures are set to change when the Government’s rail review is published.

The franchising system today is, in places, failing passengers whilst train companies are losing money.

South Western Railway, for instance, said today it was in talks with the government over the future of its franchise after declaring a £137m loss

The managerial role of the Department for Transport in England is also likely to change.

The hope is that a structural shift will make it easier to achieve a less crowded and more punctual rail network.