Why we lie about being retired 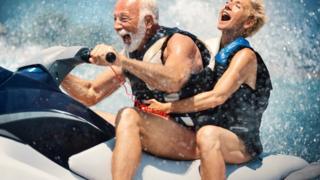 Search the word “retirement” on the internet and your screen is filled with images of silver-haired folk dancing in their kitchens, surfing, getting into ridiculous yoga postures and cuddling grandchildren.

The reality for many can be quite different. For many, the first few months of retirement can often involve an existential crisis, says Harvard Business School professor Teresa Amabile.

“It can be a very dramatic moment.” she adds.

Over four years, Prof Amabile and a team of collaborators interviewed 120 professionals about their views of retirement at three companies in different parts of the United States.

They asked interviewees at different phases of their career about their perspective.

The preliminary findings were quite stark. While retirement might start off in a blaze of well-deserved relaxation the novelty can soon wear off.

“That comes as a big surprise for a number of people,” she says.

“People think of planning for retirement as a financial exercise, and that’s all. It also needs to be a psychological and relationship exercise as well.

“We need to think about who we will be – who we want to be when our formal career ends. The people in our study who do that, tend to have a smoother transition.”

One of the most revealing parts of the research came when they asked retirees how they described themselves.

“Some will deny being retired which is very interesting, they will say what their profession is even though they’re not working in that profession any more.

Prof Amabile is talking to me on the sidelines of an event, hosted by the Nobel Foundation where Nobel laureates and other experts are discussing the future of ageing.

Edmund Phelps was awarded the Nobel Prize in Economic Sciences in 2006 and in his mid-80s he is not slowing down. His few days in Madrid are spent giving university lectures, panel presentations and media interviews.

“Work is so fundamental to the good life,” he says.

“Work is the main source of a meaningful existence for most people. A mother or dad might be occupied bringing up children for a couple of decades but that doesn’t last forever.

“For almost everybody work is essential to play a role in the discovery of new things.

“The world of work is a dynamic place and it’s a fantastic place for testing yourself and showing what you can do, achieving and discovering and exploring, all of that goes on in the wonderland of work.”

He sees denying older people their place in this “wonderland” as wrong, especially in countries with mandatory retirement ages.

Mario Vargas Llosa writes every day but can those who have more physical jobs also work longer?

Other Nobel Laureates agree. Novelist Mario Vargas Llosa, also in his 80s, works at his desk every day from 10am to 2pm.

“And I do not have the feeling that it’s a job. Actually writing is a pleasure for me, even if I have very difficult periods.

“What I find very important is to try to take advantage of that life, not to waste opportunities. I think it is very important to have a vocation and be able to materialize it, although of course many people can not do it.”

The retirement age is rising in many countries around the world and is going to affect people in different ways.

If you’re a writer or an economist, then working longer might be more possible than for those whose jobs are very physical.

Yet when governments or companies decide not to pay out pensions and other retirement benefits until later the results could even lead to civil unrest, warns David Bloom, a professor of economics and demography at Harvard’s School of Public Health.

“One thing I think everyone remembers is a few years ago we had the ‘Arab Spring’, and it was all about aspirations which were going unfulfilled in many countries.

“I think we may have the same thing among older people.”

“Sometimes we talk about grey riots or silver riots taking place. If you raise the retirement age then people who expected to retire in one, two, three or four years, [then suddenly] they’re not able to – because you’ve just changed the age at which they collect their pension.

“We’ve seen it in a lot of countries, especially in Europe, I think it could get worse,” says Prof Bloom.

Those that are carrying out physical labour are not going to have the same opportunities to work longer in their late 60s and 70s, compared to those “who work with their brains or provide services”, he says.

“That policy change is going to serve some parts of the population and not others.

“That’s the inequity that is going to have to be addressed, otherwise we have the potential for friction between blue-collar and white-collar among older workers.”

Retirement is one of the biggest challenges facing developed economies; both for governments and companies in developing new policies to respond to ageing populations – and for many of us personally and professionally.

So far it seems, very few solutions have been found.