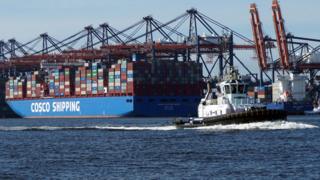 Rotterdam has preparations in place for a no-deal Brexit

While uncertainty hangs over the future of the UK’s relationship with the EU, the European ports which send millions of tonnes of goods to Britain every year have been planning for every eventuality – including the prospect of a no-deal Brexit. Will their plans be enough to avert chaos?

For centuries, barges from the inland waterways of Europe and ships from around the world have sailed in and out of Rotterdam’s harbour.

Today the port is the 10th biggest in the world. Every year it handles “about 470 million tonnes of goods – about the same volume as being handled in all British ports together”, says Leon Willems of the Rotterdam Port Authority.

Officials are proud of the efficiency of operations here. Much of this is down to the use of an electronic system known as Portbase, which handles a myriad of digitised documents such as transport bookings and custom declarations, removing the need for physical paperwork.

But there’s another important industry in this busy part of southern Netherlands that is also proud of its productivity – agriculture. The road from of Rotterdam towards the North Sea is edged for miles by vast areas of greenhouses. Crops grown include tomatoes and cucumbers – often destined for the UK.

The intensity of farming here has helped to turn the country into one of the world’s biggest food exporters. “It has to do with the efficiency of the farmers,” says Michel van der Maas of the Dutch food safety authority.

“Because we are a small country, we have learned to do things in a tightly-packed area.”

The efficiency of Dutch farmers is mirrored by a smooth and fast delivery process. Annika Hult, director of North Sea trade for ferry operator Stena Line, says a British supermarket can place an order for tomatoes in the morning and the items can be on the shelves the following day.

Trucks loaded with fresh produce can arrive as little as 15 minutes before one of Stena’s giant ships departs for the UK, says Ms Hult. “That is how lean and ‘just in time’ the process is today… we are really making modern society work.”

But some Dutch business leaders fear that a giant spanner may soon be thrown into the works of this well-oiled machine – a no-deal Brexit.

Mart Valstar runs Best Fresh, a large family-owned enterprise that imports and exports food products to and from dozens of countries, including the UK.

He worries that not only will his business be hit by a no-deal Brexit, but also the full English breakfast. This is something, he says, that the British may “have to forget for a few months” if Brexit goes ahead without a deal.

Mr Valstar claims that several of the ingredients of a traditional English breakfast, such as bacon and tomatoes, are often imported. Statistics seem to bear this out – according to the British Meat Processors Association, the UK is a net importer of pig meat.

Meanwhile, the British Tomato Growers’ Association says domestic production accounts for only around a fifth of the total volume of tomatoes sold in the UK every year.

Tomatoes are Mr Valstar’s particular concern: “The price is set daily, and every day there is a new delivery… tomatoes are not a product which you should keep.

“If there is a Brexit without any arrangements about customs and import duties, there will be long delays at the customs.” He fears that shipments could arrive so late that product quality could no longer be guaranteed.

“The shops will run out of stock,” he says. “The shelves will be empty.”

At the moment, goods can move freely between the UK and the Netherlands (and other EU countries) without any checks at the port.

But after a no-deal Brexit, the UK will no longer be part of the EU’s customs union – and whatever arrangement eventually transpires, the Rotterdam Port Authority expects the current frictionless border arrangements to cease.

It is the introduction of customs processes that Mr Valstar fears will delay deliveries of his produce, and those of many others. But are his fears justified?

Leon Willems says that Dutch authorities and businesses have already made extensive preparations to ensure that any disruption that Brexit might cause is kept to a minimum.

He cites the example of Dutch customs, which has hired hundreds of extra staff to help handle the millions of new administrative checks that will be needed after Brexit. Vast emergency parking areas for lorries have been set up for drivers whose papers are not in order.

Other organisations have also taken action. The Dutch food safety authority has recruited nearly 150 extra staff, including some 100 “Brexit vets” to help deal with a big increase in checks on foodstuffs once Britain has left the EU.

But will these preparations be enough to minimise potential chaos from a no-deal Brexit? No-one we spoke to in the Netherlands was entirely sure what would actually happen after Brexit.

Sigrid Kaag, the Dutch Minister for Foreign Trade and Development Cooperation, says the country’s government is confident that everything possible has been done to prepare for all Brexit scenarios.

But she hopes “the UK is as prepared as we are, because that will mitigate the anticipated negative impact on the economy, and on the flow of people and goods between the Netherlands and the UK. And you know, one hand can’t clap.”

As for Brexit preparations in the UK, HM Revenue and Customs says “the government’s priority is to keep goods moving and avoid delays at the border”, and that as the UK’s customs authority it “will act to ensure that border processes are as smooth as possible, without compromising security”.

Its plans include simplified procedures for some goods arriving from Europe, in order to minimise potential traffic congestion. These measures will allow many lorries to pass quickly through ports like Dover, with customs and other formalities being dealt with later.

One phrase that many people mentioned whilst we were in Rotterdam was “prepare for the worst, but hope for the best”. And looking ahead, Mrs Kaag is optimistic that whatever happens, ties between the Netherlands and the UK will remain strong.

“We share values and a common purpose,” she says. “We need to continue to nurture this relationship in new formal settings – but it depends on the nature of the deal.”

You can hear In Business: Plain sailing? presented by Ruth Alexander and produced by Neil Koenig, on BBC Radio 4 at 9.30pm on Sunday, 8 September. It will also be available via the BBC Sounds app.