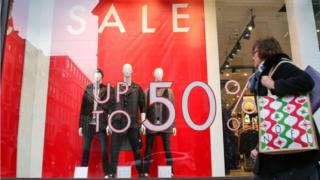 Women have been hardest hit by the wave of job losses that has swept the retail industry since 2011, a study from the Royal Society of the Arts has found.

Of the 108,000 retail jobs lost to automation and ecommerce, 70% were among female employees, it found.

The think tank also said that regions outside London were disproportionately affected by the retail downturn.

The RSA said new jobs could be created, however, if retailers offered more “experiential” shopping.

“Our research shows that the economic pain that comes with the decline of the High Street is not being felt evenly,” said Fabian Wallace-Stephens, one of the report’s authors.

The UK’s High Streets have come under pressure from the rise of online shopping, high business rates in some parts of the country, and the squeeze on incomes during the years since the financial crisis.

The pace of shop closures rose in the first half of 2019, with about 16 shops closing every day.

However the North East and East Midlands saw an 11% drop in the retail workforce, while London had a 16% increase, according to the RSA’s report.

The RSA’s study covered the years from 2011 to 2018, and found that 40,000 new warehouse and distribution jobs had been created by online retailers, but three quarters of those roles had been taken by men.

“As ever more people are shopping online, and businesses are introducing automated technology like self-service checkouts, this is changing the types of jobs available,” said Fabian Wallace-Stephens, one of the report authors.

“Women are being hit particularly hard, with jobs growth being contained to roles usually filled by men such as delivery drivers.

An in-store “influencer” would provide a mixture of concierge and stylist roles at some retailers, or shop-floor workers in supermarkets providing nutrition or cooking demonstrations, said report co-author Alan Lockey.

The RSA report also gave the example of the Lego store in Beijing, which it said felt like one of the Danish toy giant’s theme parks.

“Many of these experiences cleverly utilise new technologies such as virtual reality to immerse customers in a world made of Lego, or to envisage what customers may look like as a Lego character,” the think tank said.

Helen Dickinson, chief executive of the British Retail Consortium, said it was disappointing that job losses in retail had fallen hardest on women and less affluent regions.

“If the government wishes to support less affluent regions, it should reform the broken business rate system which holds back investment in physical space, and widens regional disparities,” she said.

Sophie Walker, chief executive of Young Women’s Trust, said young women were losing out after being “encouraged into the sector by sexist career advice and the need to find work that fits around the caring responsibilities they disproportionately shoulder”.

Around one million young women are trapped in positions of no pay or low pay, she said.

“We’ve slashed business rates by a third for many retailers – worth an estimated £1 billion – bringing the total amount of business rate support to over £13 billion and ensuring our High Streets are fit for the future,” the minister said.