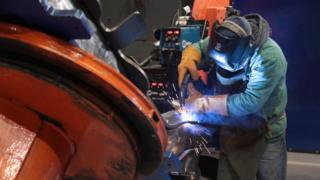 Global economic growth is likely to be only slightly faster this year than the weak performance seen in 2019, according to a World Bank forecast.

That reflects an expected recovery in some emerging and developing countries that had a difficult 2019.

But it will be offset by slower growth in the United States and some other developing nations.

Growth in 2019 was the slowest since the financial crisis. And the moderate forecast for this year is beset with uncertainty

It depends on a substantial improvement in some large emerging and developing economies. India is predicted to rebound after a marked slowdown in growth last year.

Brazil should grow somewhat more strongly after a period of weakness. Mexico and Turkey should see growth after recording none for 2019 as a whole. Argentina’s economy will continue to contract but more slowly than in the last two years.

The forecast suggests that economic activity in Iran will stop declining this year with growth returning in 2021. But even then it won’t, if the Bank’s forecasts are born out, be a strong recovery. And the political tensions and violence that have erupted in the last few days could easily undermine that.

The Bank warns of risks to this outlook. Iran is a reminder that conflict in the Middle East is an ever present danger that can have economic consequences. The report was written before those events took place.

Even so, the report says: “The disruption in Saudi oil production in mid-September highlights the potential for renewed tensions in the Middle East.”

Franziska Ohnsorge, a World Bank economist and one of the authors of the report, says these problems could feed through to emerging and developing economies through higher oil prices.

There have been occasions in the past when problems in the Middle East have led to higher oil prices and even contributed to a global recessions.

That said, Ms Ohnsorge noted two factors that could help moderate how oil prices respond: the fact that the oil producers’ group Opec has been restricting production and could reverse that action. In addition, the US shale oil industry, which is a relatively new factor in the global market, can increase production much more rapidly than traditional ways of getting oil.

Trade tensions are another potential trouble spot for global growth. They could “re-escalate”, as the report puts it. There have been signs of movement in the US-China dispute. The two sides have made what President Trump calls a phase one deal, but it is far from fully resolved. The Bank seems to be acutely aware that progress could be easily reversed and other trade tensions could arise.

There is also a concern about a rapid build-up of debt in emerging economies. The Bank says a wave of debt accumulation began after the global financial crisis. For emerging and developing economies, the report says “the increase in debt in these economies has already been larger, faster, and more broad-based than in any of the previous three waves”.

Those waves occurred over the past half-century. They have been navigating what the bank calls “dangerous waters” as this build up of debt has been accompanied by repeated disappointments over economic growth, which could make it harder to generate the resources to pay the debts.

The overall picture is one of a global outlook that is overcast and highly uncertain.