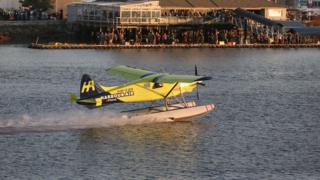 An all-electric powered seaplane has taken flight in Vancouver, Canada, in what the operators describe as a “world first” for the aviation industry.

The short test flight by Harbour Air and magniX involved a six-passenger aircraft fitted with an electric motor.

The companies said it was a first step to building the “world’s first all-electric commercial fleet”.

The push to electric could help slash carbon emissions in the high-polluting aviation sector.

“This historic flight signifies the start of the third era in aviation – the electric age,” Harbour Air and magniX said in a statement.

Launched at the Paris Air Show earlier this year, magniX said the propulsion system aims to provide a “clean and efficient way to power airplanes”.

US seaplane operator Harbour Air hopes to electrify its entire fleet by 2022, provided it secures safety and regulatory approvals.

Shifting to electric engines is seen as one way to cut greenhouse gas emissions in the aviation sector.

It comes amid growing concern from travellers over the polluting impacts of flying.

In the UK, aviation is set to be the biggest source of emissions by 2050.

A recent survey by Swiss bank UBS found people are beginning to cut air travel over concern for the environment – as the Swedish concept of “flygskam” or “flight shame” appeared to spread.

Still, electric aircraft that can travel long distances remain a big challenge for the sector.

Electrical motors, generators, power distribution and controls have advanced rapidly but battery technology has not.

An aircraft like the one flown in Vancouver could only fly about 160km (100 miles) on lithium battery power, according to AFP.

“The [flight] range now is not where we’d love it to be, but it’s enough to start the revolution,” said magniX chief executive Roei Ganzarski, the news agency reported.