‘You feel shame’ – the reality of romance scams

September 26, 2019 by Joshua Marshall No Comments 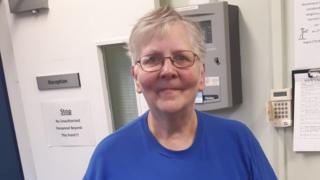 Elspet now works as a scam marshal, offering help to others

Brian had promised Elspet a bright future – a wonderful marriage later in life and their own bungalow.

But Brian was not real. He was a romance scammer, something Elspet did not realise until she had sent him £10,000.

They had met on a dating website, she had been taken in over email, and the money – including life savings – is now in his hands and lost to her.

Elspet had been convinced by his story of serving abroad in the military. She trusted him enough to believe that his friend, a diplomat, was bringing home his belongings but needed money for fares and courier fees. It was a lie.

Now she works as a scam marshal, listening to victims and warning people in her community centre about the danger of this kind of fraud.

“I tell people they should report it, not be afraid to talk to family and friends. They do not need to be alone in this,” she said.

New figures show that her work is more needed than ever.

Romance scam cases rose by 64% in the first half of the year compared with the same period a year earlier, according to the data from banking trade body, UK Finance.

Fraudsters choose their victims by looking for signs of vulnerability, trawling through profiles, and winning trust over weeks and months.

Previous research has suggested the majority of victims are women, and they lose twice as much on average as men.

Romance fraud represents only a small fraction of losses to so-called authorised push payment (APP) fraud. This is when a criminal tricks their victim into sending money directly from their savings to an account which the criminal controls.

In the first half of the year, APP fraud losses totalled £208m in 58,000 cases – the vast majority of victims being individuals, rather than businesses. The number of cases was 69% higher, and losses 40% higher than the same period a year earlier. However, banks said there were better records of these scams being made by banks, and victims were more likely to come forward.

Only £39m (19%) of this was refunded by the banks. Until recently, banks considered payments to have been agreed to by victims, so would not automatically refund the money as they would in other types of fraud, such as when debit card details were compromised.

In May, a group of the biggest banks agreed to a new voluntary code which included a new set of criteria to judge whether the customer should get the money back. It is proposed that the compensation would come from a central pot gathered from a transaction fee on all bank transfers over £30 and paid by those banks signed up to the scheme.

Now any victim who has taken reasonable care, or has any element of vulnerability, is much more likely to receive a refund of the lost money. A victim who has been “grossly negligent” will not be reimbursed.

Having only launched in May, the effect of the scheme is yet to be seen in the fraud figures which cover the first half of the year.

One bank – TSB – has broken ranks in announcing a guarantee that it would automatically refund all “innocent” customers who have been defrauded.

However, other banks have suggested that a blanket refund policy would simply encourage fraudsters to try their luck.