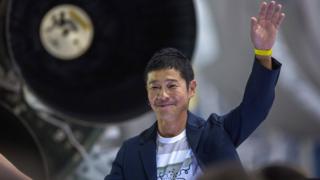 Japanese billionaire Yusaku Maezawa has agreed to sell most of his stake in online fashion firm Zozo to Yahoo Japan as part of a deal worth $3.7bn ($3bn).

Mr Maezawa, known for his splashy art collection and space travel ambitions, will also step down as chief executive.

The company also made a failed attempt at custom-fit clothing, and later closed its European and US operations.

Yahoo Japan, a subsidiary of tech and investment conglomerate Softbank, has offered to pay 400 billion yen for a 50.1% stake in Zozo.

The move would allow Yahoo Japan to better compete with rivals Amazon and Rakuten.

As part of the deal, Mr Maezawa agreed to sell a stake of around 30% to Yahoo Japan and will step down from Zozo’s top job.

“I will entrust Zozo to a new president and take my own path,” he said in a Twitter post.

The 43-year-old first became famous as the drummer in punk band Switch Style, but made his fortune in the fashion world.

He’s worth $2.2bn, according to Forbes, and has spent a much of his fortune on art.

Last year he was named as the first private passenger due to be flown around the Moon by SpaceX, the company owned by another famous billionaire, Elon Musk.

The price Mr Maezawa agreed to pay for his ticket to space has not been disclosed, but according to Mr Musk it was “a lot of money”.