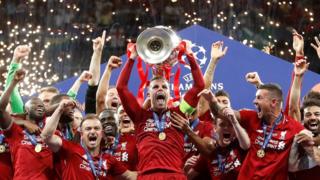 An online retailer has been censured for sending a mass email telling competition entrants they had each won tickets to the Champions League final.

Zavvi, sent personalised emails to subscribers telling them they had won a VIP trip to the match in Madrid when only one person had actually won.

The Advertising Standards Authority (ASA) received complaints from 57 people who had wrongly been told they had won.

Zavvi has apologised for the error.

A competition, in partnership with Mastercard, had offered two adults an all-expenses two-night trip to the much-anticipated Champions League final between Liverpool and Spurs.

Numerous people who had received the emails in May took to social media to announce their news – and dismay on learning of the error.

Zavvi tweeted about the issue

The ASA investigated whether the promotion had been administered properly.

Zavvi told the ASA that the email platform they used for sending marketing and promotional emails incorrectly linked the email for the competition winner to the entire opted-in Zavvi marketing database.

They added it appeared to have been a “one-off technical issue” which may have originated from human error.

The watchdog said it acknowledged Zavvi’s explanation but consumers were given “justifiable” ground for complaint.

“We therefore concluded that the promotion had not been administered in accordance with the CAP Code [non-broadcast advertising and direct and promotional marketing code,” the ASA ruled.

Zavvi is owned by Cheshire-based The Hut Group which has its headquarters in Northwich.